Moyale has the reputation of being a typical, charmless border town, and it kind of lives up to that. Nevertheless, we had decided early that we would stay here for the night after crossing the border, to prevent any fatigue-related accidents. The Ethiopian border process also took a long while – due to a “trainee“ customs officer – and we were only through all documents at 4:30 pm. By then we had just time enough to roll into town (on the RIGHT side of the road, once again) and look for the place our friend “Floki“ Florian had recommended. The Ghion Hotel gave us the uber-dirtiest hotel room we yet had to sleep in, which especially made a visit to the bathroom a short one. Anne’s request to clean at least the toilet was followed with a smile, but the cleaning consisted of mopping around the top with a dirty cloth for about 2 seconds. Turned out also that the whole town had some water problems, already had those for a few days, so even when we went out to a nice local bar later that night – no water for cleaning hands or flushing a toilet. They guy there actually offered Anne his bottle of drinking water to wash her hands. We made the best of it by walking around town (spending as short a time as possible in our “hotel” room…), buying goat samosas from a local lady, water bottles from another kid, and drinking our first Ethiopian café and beer at the aforementioned bar.

Wherever we went, we attracted incredulous views, lots of smiles and conversation-starters (“How are you?“, quite often no more English available though). In the bar, we chatted away the whole evening with the two waiters and another guy who was just having his beer there, talking about our route, the Kenyan terrorist issue, and the pleasures and sights we had to expect in Ethiopia. We learned our first word Amharic (Ama se kenalo = Thank you) and made it back to our hotel sleepy and happy – all the time waving and stopping to answer greetings and questions. What a great start into Ethiopia!

The next morning, we were woken by the classic African duet of rooster and muezzin (when one stops, the other takes its turn again). We packed our stuff and hoped for a coffee before we left, but the coffee lady just outside the hotel gate was unfortunately still cleaning up – no coffee, sorry. Instead we headed straight for the gas station to fill up the tanks. The first one had no petrol, the second one had petrol, but just a few seconds after we stopped there the electricity went off. We did not get the problem at first, as the English of the attendants was very basic – “No light!“ – was the often repeated sentence, and we thought they meant unleaded petrol, but as we had seen other motorbikes getting gas there, we did not believe them. As it happened several times on the trip, finally someone came along who spoke a little bit more English, and the whole mystery was solved. We could not find out though when the “lights“ a.k.a. “electricity” would be back on, and had just decided to get going again and try our luck in another town, when a friendly motorbike driver sped into the gas station and waved at us to follow him. Another gas station, clever guys they were, had a generator and a storage of petrol at the Kerosene (!) pump. We queued with a bunch of motorbikes and Tuk-Tuks, and a good half hour later we had finally filled up our tanks (with a little top-up on the regular price, for the generator services) and were good to go. The next bigger place on our route was a town called Mega (!) and this is where we planned to have our breakfast / early lunch. The road to Mega was all tarred, with a lot of potholes at times, but ok-ish. What we had been told the evening before was that the tarring of the Moyale road on the Kenyan side was actually part of a bigger project between Kenya and Ethiopia: to tar and improve the whole stretch of road from Addis Ababa to Nairobi to Mombasa. More than 700km on the Ethiopian side, and over 1.200km on the Kenyan. A huge project indeed! The road in Ethiopia had already been tarred a good while ago, but was quite narrow and also (we mentioned the potholes) not always in the best condition. The project here focused on making the road wider, re-tarring it and in parts also changing the route.

On this day we had the pleasure to ride through all stages of this massive project: the old bad road, the new perfect road, the mess in between with sand-and-rubble diversions, and lots and lots of trucks and building machines whirling up dust.

We reached Mega close to 11am and were starved, for coffee and food. The little roadside restaurant we stopped at had a waiter who understood our needs very well, and served us our first anjera (a slightly sour pancake) with egg, lentils and vegetables. It was delicious, and though we still look very clumsy eating that stuff, we did not care. We also tried to acquire a SIM card there which was a bit more of a hassle, as you need a passport copy, a passport-size photo, and then in the end of course there were no cards in micro-SIM size – but Anne had watched so many times when people had cut the little plastics, that she felt confident she could do it herself. Seemed to work alright as well.*

Soon after the Moyale, we had realized that our pace was slower than expected – because in Ethiopia, just as in Malawi, the road belongs to the people (and to goats, sheep, donkeys, horses and cattle. Oh, and dogs). Despite that we still held on to the plan to reach Addis in two days. No idea why we did that, but we did. So on we rushed from Mega, leaving dusty savannah-like Southern Ethiopia behind and dove into wooded and lush hills on our way to Awasa. People had told us Ethiopia is beautiful (thinking of you now, Ferrial), and we were not disappointed. The road was less beautiful, as we now hit frequent construction sites, which meant diversions onto dirt/mud roads. Which we normally love, but not when you get stuck behind a row of trucks on their way to the capital, throwing dust and rocks in your face. When we got closer to Awasa, the new road cuts away from the old one, which meant we could follow our trail in peace – rolling through what felt like an unending row of tiny villages, one next to the other, waving and smiling until our arms and features hurt. The only problem in that was that it was impossible to find a quiet place to use a bush toilet – if you do not want to pee into someones front garden. And it took ages of course, as for the most part we could only go 40km/h. But nice people and landscape, so not complaints. And no rain (!).

Shortly before Dilla, we again had “Zambian luck“: When we stopped at the road to take some pictures and discuss where we could stay that night (as we could not find any camp site on the GPS and were not keen on dirty hotels), a pick-up stopped and asked us where we were going. Sergeye (hope I spell that correctly) was delighted when he found out that we are Germans – he worked for a German missionary for several years and learned his trade, construction, from him – and immediately hooked us up with the Korean Christian Academy, where Mrs. Ba welcomed us and let us sleep in one of their guesthouses. Once again, we had been met with extraordinary hospitality by complete strangers. These are the experiences that make this trip. A huge THANK YOU to Mrs. Ba and Sergeye (and we will try and recruit some volunteers for you!). If Anne would not have pushed Jan’s bike over (resulting in the GoPro Mount on Jan’s helmet being damaged), the day would have had a perfect end indeed.

The next morning we left for Addis, taking a little detour through the lovely lakeside town of Awasa, where we also treated ourselves to another lunch with anjera, still could get enough of that stuff. Already the day before we had realized two additions to our normal set of traffic companions: Besides Tuk-Tuks (three-wheeled little cabins), taxis (minibusses), motors (small motorbikes), bicycles and of course some cars, trucks and busses, we now had horse carriages and donkey carts. Especially the horse carriages intrigued us. Donkey carts we had seen elsewhere (though not as abundantly), but the horse carriages were something new, especially as they were used as taxis, not for transporting loads (that is donkey business, it seems). The horses are mostly a miserable lot, though.

The further trip to Addis led us again through beautiful landscapes, which unfortunately abruptly ended when we hit Debre Zeit, approximately 40 km before Addis. We initially hoped the heavy traffic was due to some blockages and would subside before we hit the real traffic in Addis, but it turned out we were not so lucky. Still not as bad as Dar (NOTHING so far can beat the mixture of major reconstruction and lunatic traffic police we had there), but tiring enough. We played catch with buses, trucks and taxis to get to Addis before it got dark (or started to rain heavily), which is never good for the mood. Once we reached the famous city, the flow actually improved. Probably also because we drive like assholes by now. All the care and slowness we show when riding through villages turns into the opposite in cities, where we hoot, cut and push our way through. The drivers in Addis are a lot more respectful of each other then the peeps in Nairobi and Dar, and we think we sometimes left quite a rude impression. But we just f*cking hate city traffic, so what the heck, whatever gets us through safe but faster is ok for us.

Our selected “watering hole“ was Wims’ Holland House, which lies in an obscure location next to the main train station (the “gare“ or “la gahare” when pronounced by Ethiopians). Anne worried she had given the GPS the wrong coordinates before Jan spotted the dutch colours. Turns out Wim’s is more of a restaurant and bar, with some few additional rooms to rent, and a tiny little spot of green for camping. Most of that is right now occupied by a row of 4WDs – all part of a bigger 5-year-tour through Africa, it seems, that is currently taking a break. As it is the rainy season, camping is not much sought after, so we had the place mostly for ourselves. Our friends Birgit and Rainer had already arrived two days before, and taken the last free room. We were very happy to see the two again – we kind of catch up in every country, and share our tips, news and travel stories. After a few beers, it was time for a please-dear-god-do-not-let-it-rain-too-hard-on-our-tent prayer, and some sleep. From Nairobi to Addis in 5 days, 750 km in total, riding more than 8 hours every day – we were in for a break!

*”Seemed“, because throughout our stay in Ethiopia we had a constant struggle with the network – sometimes we could not make calls, often we could not access the Internet; also not helping was that the error messages in English are kind of picked-at-random, pointing you in the wrong direction – the problem is always and only that the Ethio Tel Network is crappy and unreliable. And you have to accept that. We finally understood on day 5, made life and traveling a lot easier. 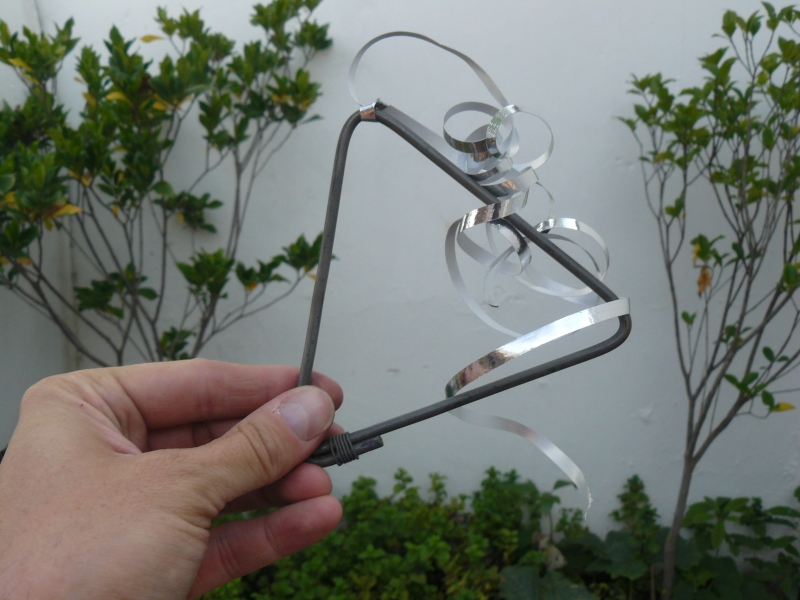 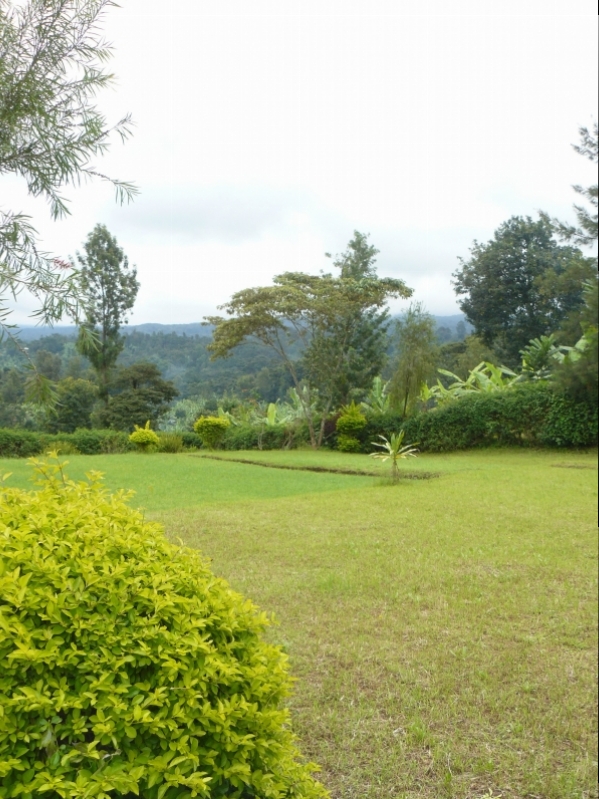 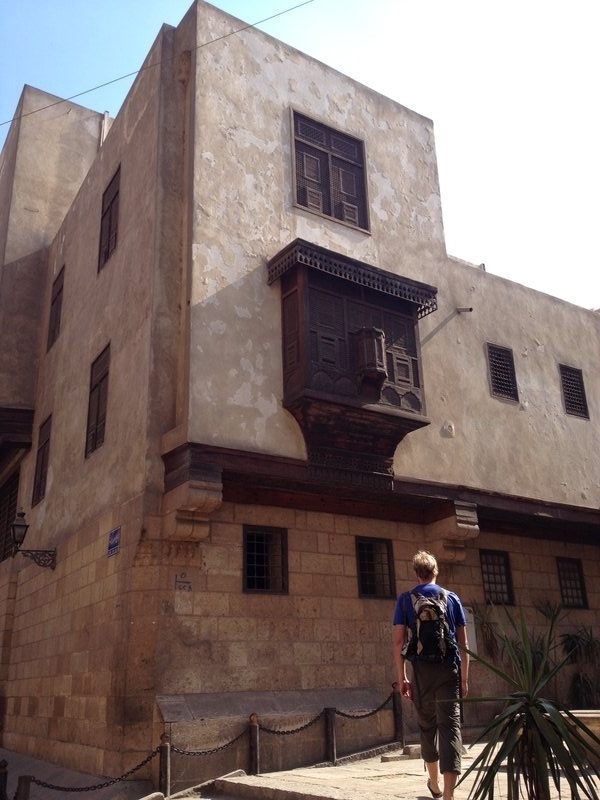 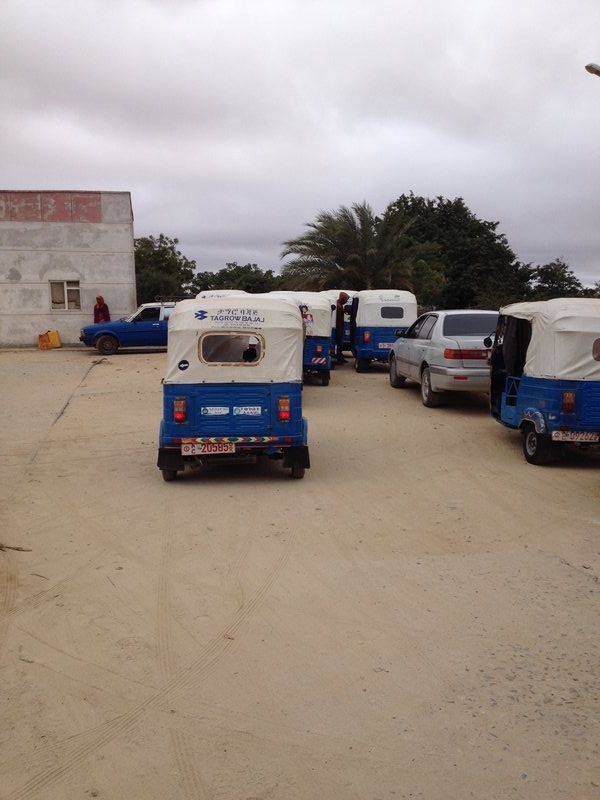 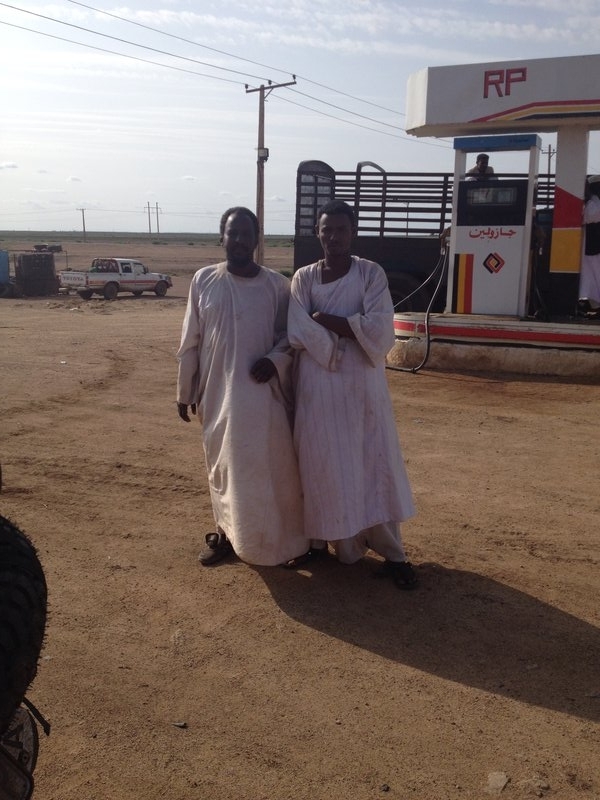 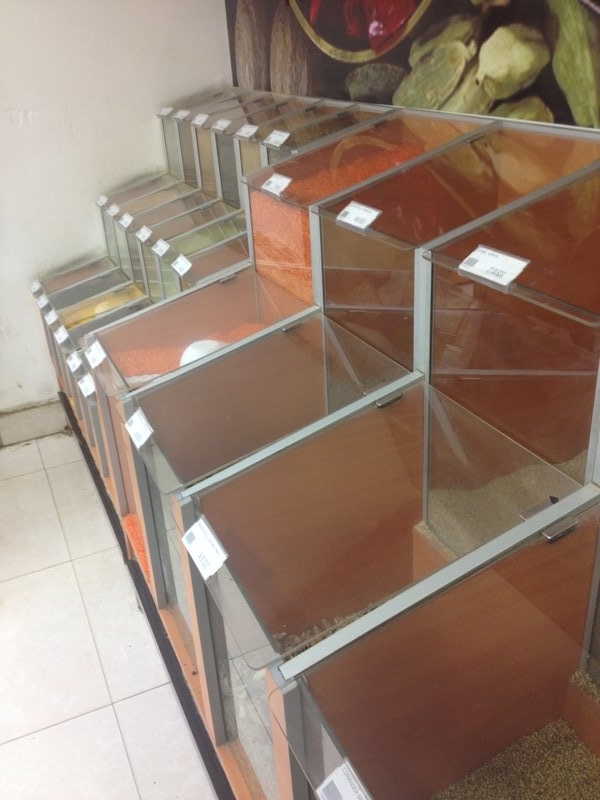 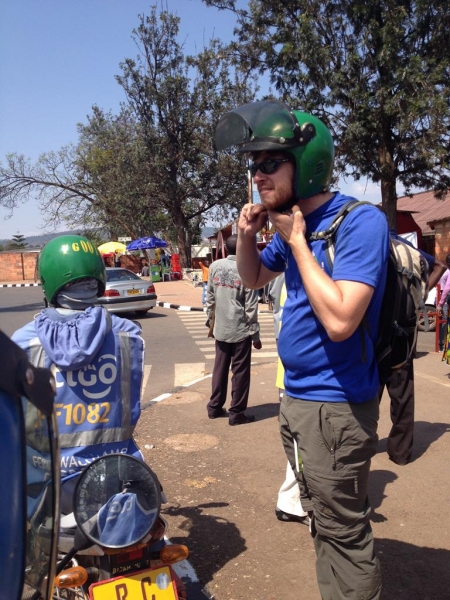 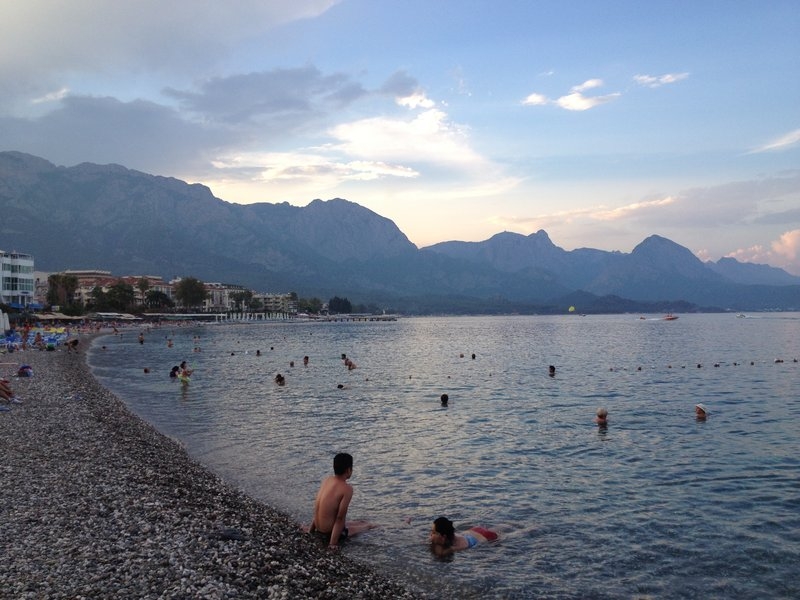 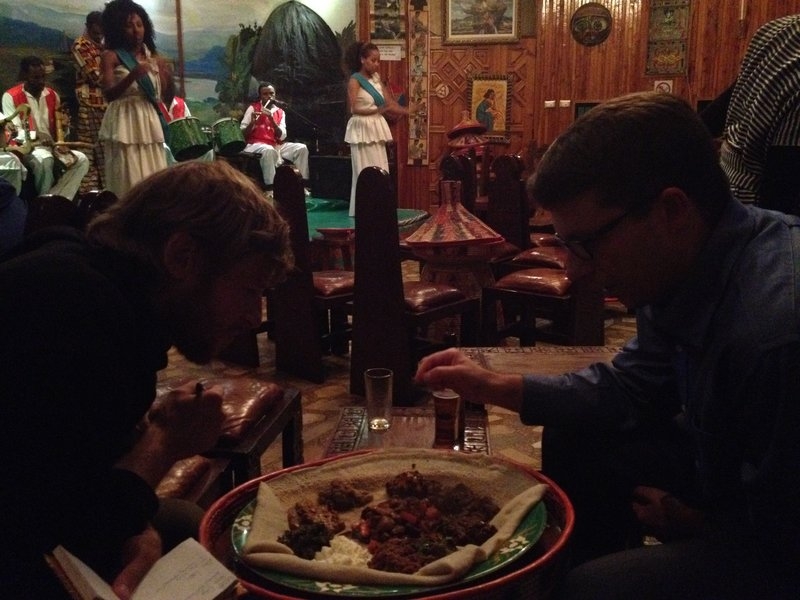 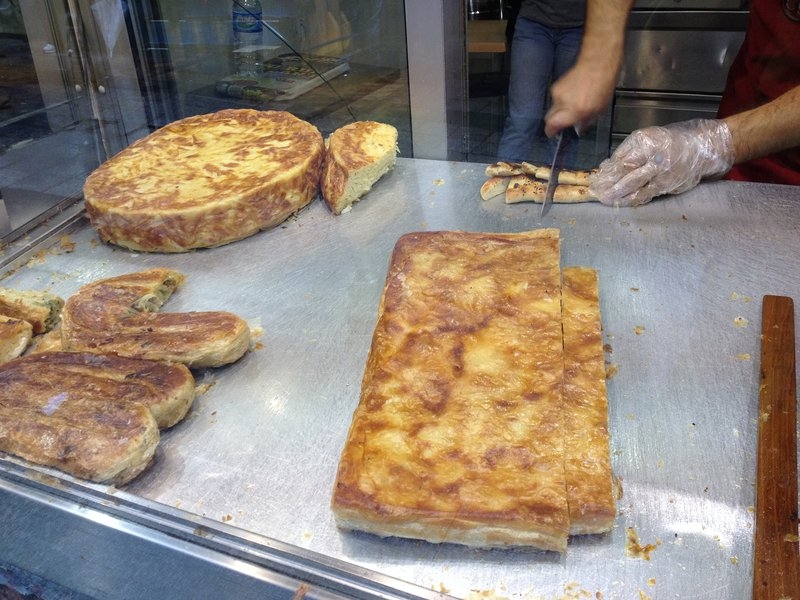